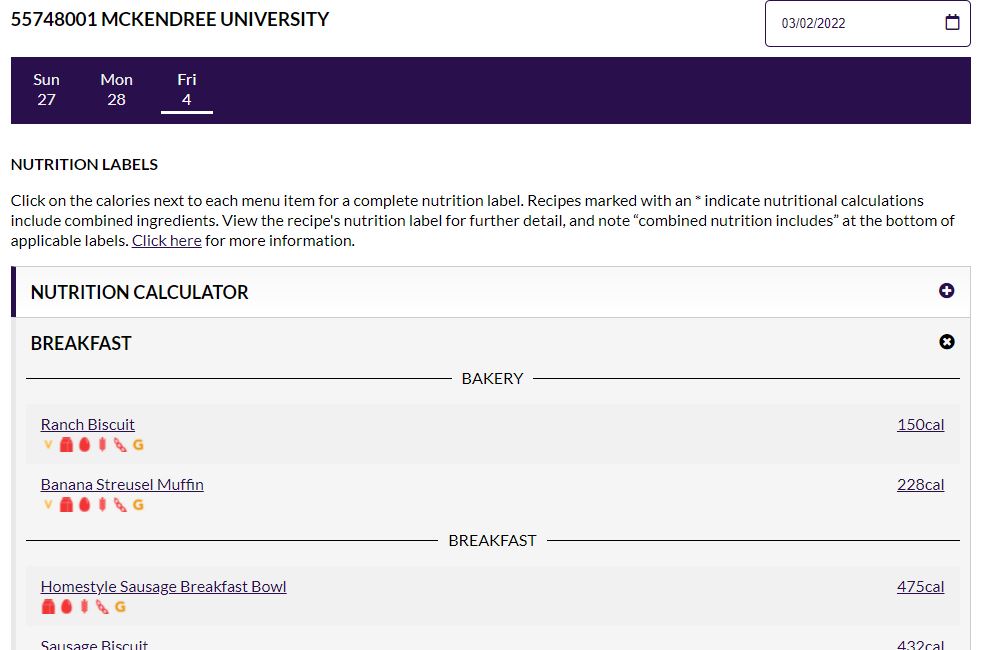 If you have lived on campus, then you have been to either Ames, 1828 or both. The dining services hub spots for the McKendree University campus are great places for not only food on campus, but they are also epicenters for the soul of the student body. They are two of the primary places (excluding classrooms and dorms) where students get to meet and hang out with other students. Other students aren’t the only people students love to see at these places though – ask anyone on campus if they know a worker at Ames or 1828, and they’ll likely know one by name, or even have a class with them.

What you may not know though, is that today is National Employee Appreciation Day. So I will be celebrating by giving an insider look into the employees of McKendree’s Dining Services. The workers at Ames and 1828 are a mixed bag of students and full-time staff, and I had the honor of interviewing Viola who works at 1828, and Justin who works at Ames. I was also able to have a chat with Chandler, who is the general manager of Dining Services here at McKendree.

My endeavor behind the scenes of dining services started with Chandler, where I asked him about what goes into running two restaurants on a college campus. When asked what exactly his role was, he started a laundry list of things he takes care of. He stated, “I’m the general manager, the account director, so I oversee Ames, 1828 and all aspects of our contract with McKendree University….” For those that didn’t know, our dining services are a product of the university liaising with Sodexo, a food services and facilities management company.

I then asked what a normal day on the job looked like and he responded, “Supporting my chef, handling finances, delegating, client relations and Sodexo has got a lot of initiatives that we are trying to get out to the students.” He continued on the subject of Sodexo saying, “One of the things we have to do is just ensure that we allow the university to know that Sodexo is more than just me and my management team. We’re an organization, we have a lot of support outside [the university] to provide the best services to the university and the students.”

After that, I asked him what goes into hiring workers at our dining establishments. “We have a full-time staff that we source from the outside for our skilled positions and we’re connected to the university so we want to add a number of student jobs,” he explained. “We can do work-study and we can hire students that can’t do work-xstudy. This year, in fact, we’ve had more international students work for us than ever and it’s a good opportunity for them as we are considered an on-campus job and they are limited to where they can work.”

For those students from the US who may not know, when international students travel here to attend school they need a student Visa and with that come restrictions on where and how many hours you can work. Chandler also mentioned that the types of jobs students are getting at Ames/1828 are increasing too. He said, “traditionally they’ve kinda just been table wipers and dish room, and now we have a lot more as liner servers and filling needs that we just can’t get in a tight job market.”

One of these workers is Viola, a fellow member of the McKendree Review, who also works at 1828. I started our conversation by asking her what she does on the job at 1828 to which she responded, “My main role in 1828 is working in the kitchen and preparing the menu items our students order. I also work up front at the register or Starbucks section if some shifts need to be covered.”

Getting to work at a place where you will likely see at least one person you know every day as well as getting some pocket money sounds like a pretty sweet gig to me, so I asked how easy or hard it is to get a job at 1828. “The hardest part of working in 1828 is the training and learning because there are so many things to do and you need to be able to work multiple things together at the same time,” she explained. “As a food business,x they are also very strict in terms of health policy and food conservation so there are a lot of things you need to learn before you get started. When you get used to it, though, you enjoy it as you don’t feel like it is difficult anymore.” So for those interested in applying for a job at Ames/1828, be prepared to learn some new skills and safety precautions. If you are genuinely interested in applying for a job there will be information below on who to get in touch with as well.

Another worker that I had the pleasure of interviewing was Justin, who has been working at Ames for about 7 years now. I asked him what his role was at Ames and he explained to me that when working the front, it’s not one job for one person. Justin said, “It depends on the day, if it’s tacos, we want to focus mainly on tacos. Everybody pretty much helps out, it’s not just one person at one station. The only two stations that have ‘a label’ are Pizza and grill.” This promotes better work relationships for the staff through the use of teamwork to navigate a variable work environment.

The workers of Ames/1828 not only have social relations with their colleagues but with all the students that eat at their establishments. I have first-hand experience in this with the great conversations I’ve had with Justin while waiting for a burger, with Joni as she scanned me in for breakfast or with Steph when I was in the mood for a sandwich (rest in peace, Ames sandwich bar).

I asked Justin and Viola if working at their respective establishments had increased their social relations with the school and they both agreed. Viola said, “Working at 1828 definitely increased my social relations. I love serving the students and getting to chat with them or interact with the adults that work with me and my boss KK [Kaylyn Ruiz].” She also mentioned, “I also cook meals for some professors every now and again and that’s funny too.” Justin’s response was similar, saying, “Oh yeah, hands down. We’re pretty much friends with everyone, like every time they walk up they’re like ‘oh hey, how was your weekend?’ The conversation is friendly and everything is pretty much mellowed out.”

Jumping back to my conversation with Chandler, I was curious to know what our dining services offered beyond the food itself. Chandler responded, “We’ve recently, this year, rolled out BitePlus, which is an online mobile ordering app for 1828. We started in the fall with just drinks and we’ve expanded that out to some food items now. Unfortunately, you have to have Bogey Bucks (money deposited to the school for use at Ames/1828 when not on a Meal Plan) or Flex Dollars (money credited to your account per semester based on your meal plan).

There’s a credit card payment method, but as long as you have Flex or Bogey Bucks you can preorder on mobile, pick your time either ASAP or schedule it for when you get out of class or something. Prepay for it on the app and then walk in to 1828 and pick it up.”

He then went on to explain how to add Bogey Bucks to your account. “There are two ways students can add Bogey Buck to their account. In the past, if you go through the dining site, it’s called eCommerce and although it’s effective, once you place the order you have to wait for us to open the email and then put it on to your account,” he said. “Well now, in your email system [MyMcK Portal] there’s one that says Bogey Bucks when you click on that there’s a ‘Make a Deposit’ [button] and you can make a deposit with much more flexibility in how much you put in and it goes instantly on to your account. So if you’re at the register and they say you’re out of money, you can log in to your portal, make a deposit and it’ll be right on your [ID] card.”

It is updates and improvements like these that push our dining services group into the upper echelon of the industry. Chandler then went back to the topic of the BitePlus app talking about a feature I thought was super cool. He said, “You can also pull up the menu and see the nutritional information for those who are calorie counting, or have allergies.”

We went on to talk about the various meal plans that many of you are familiar with and he mentioned that they are in the process of increasing the marketing on the various plans available and which plan is best for different types of students. One plan he mentioned that I had not heard of before was a block plan for people that commute or live out at McKendree West. This block plan gives you 25 meals total for the semester that you can use at Ames or as a meal exchange in 1828. This is great for students that don’t want to have to leave campus for lunch when they have classes in the morning and afternoon or for those who live at West and would rather take a short trip for good food instead of cooking themselves. This plan is only $215 as well which will save you some money, over paying cash/credit at our dining establishment.

My final question for Viola and Justin was asking them if they had any secret menu items they knew about or tips for any future Bearcats to make the most of their order. Justin said, “There have been a couple times where a student asked for a hamburger quesadilla, we do chicken quesadillas every once in a while. We can try to bring some [secret menu items].” Viola’s response leaned more towards tips for the future customers of 1828 saying, “My tip for those who go to 1828 is not to stop only on the basics and well known items, such as chicken bacon ranch wraps (our best seller) and cheeseburgers, but to dip into the menu list and order different items such as the homemade flatbread pizza or our weekly specials.”

As I mentioned at the beginning of the article, today is National Employee Appreciation Day and to celebrate, not only did you get this fantastic article but there will also be a banner put out at Ames to congratulate the staff and sharpies for students to show their appreciation with a thank you or a shout out!

Those that I interviewed along with the rest of the Sodexo and student staff work hard to ensure us students have good food and enough of it to keep all of us going. They do such a good job that they were even ranked within the top three in customer satisfaction within the five state Midwest. At the end of my interview with Chandler, he mentioned improvements dining services aims to make in the near future and the main one was communication with the student body. He mentioned working with the Student Government Association (SGA) to increase the voice of the student body, among other plans for dining services to continue to serve us with smiles.